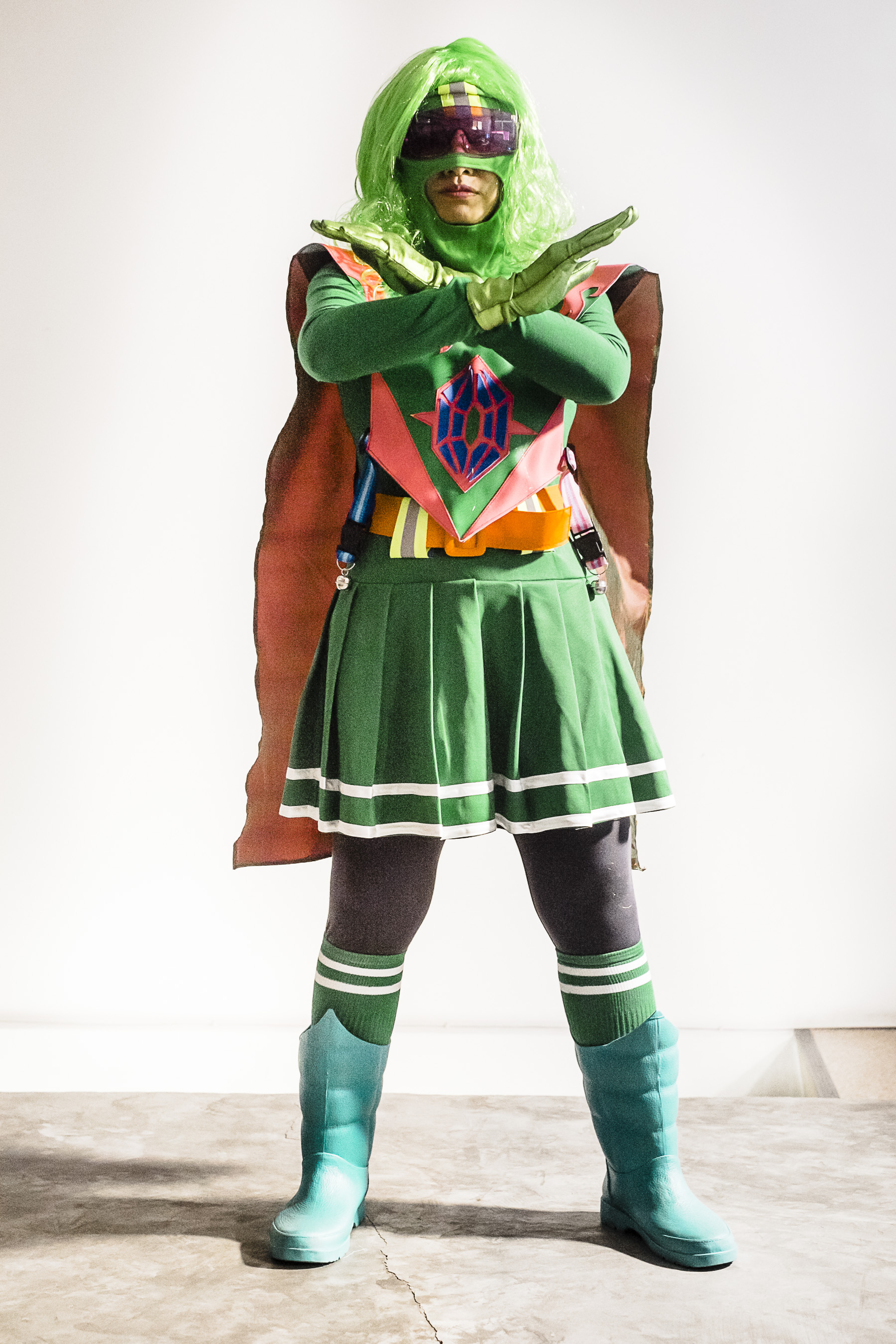 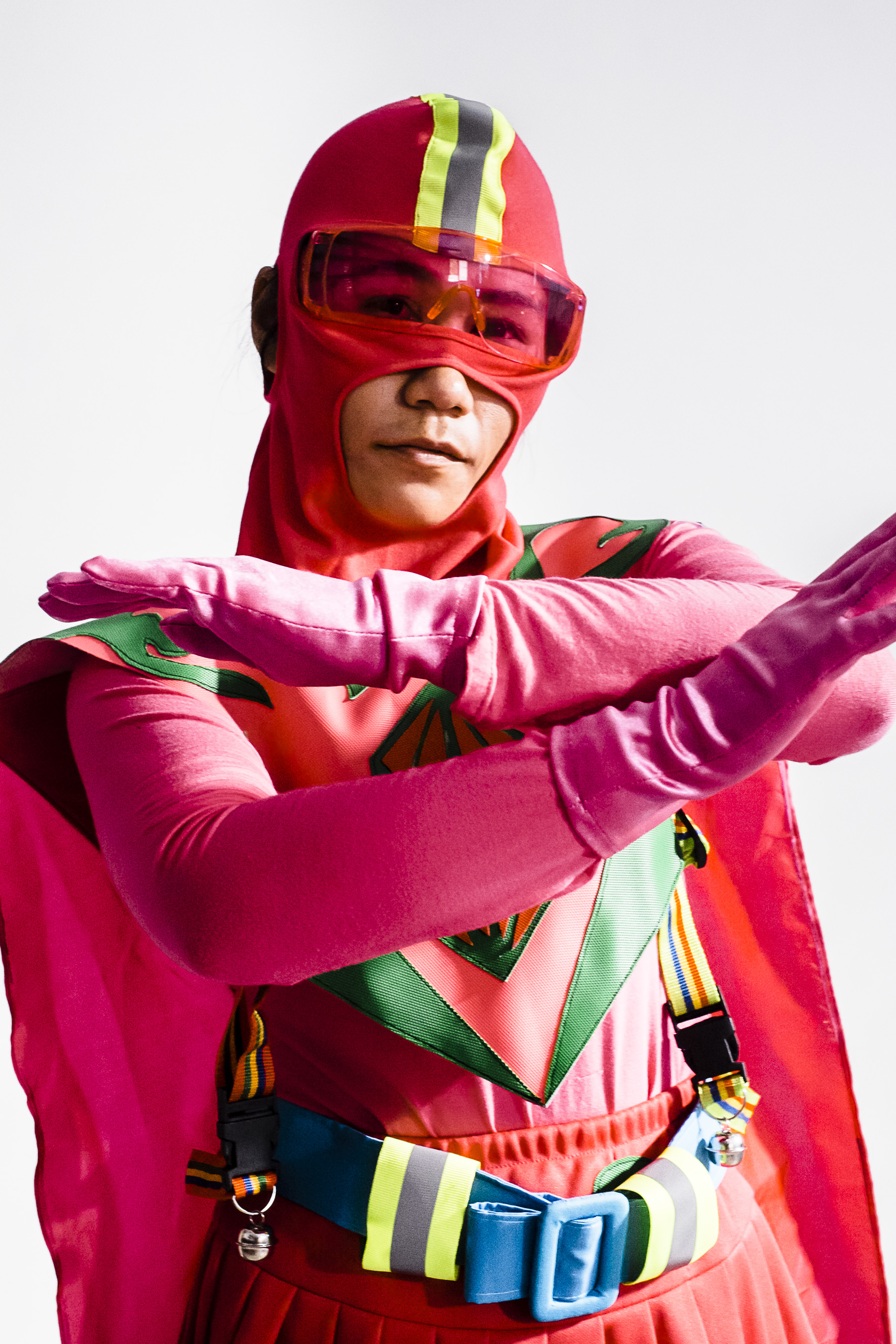 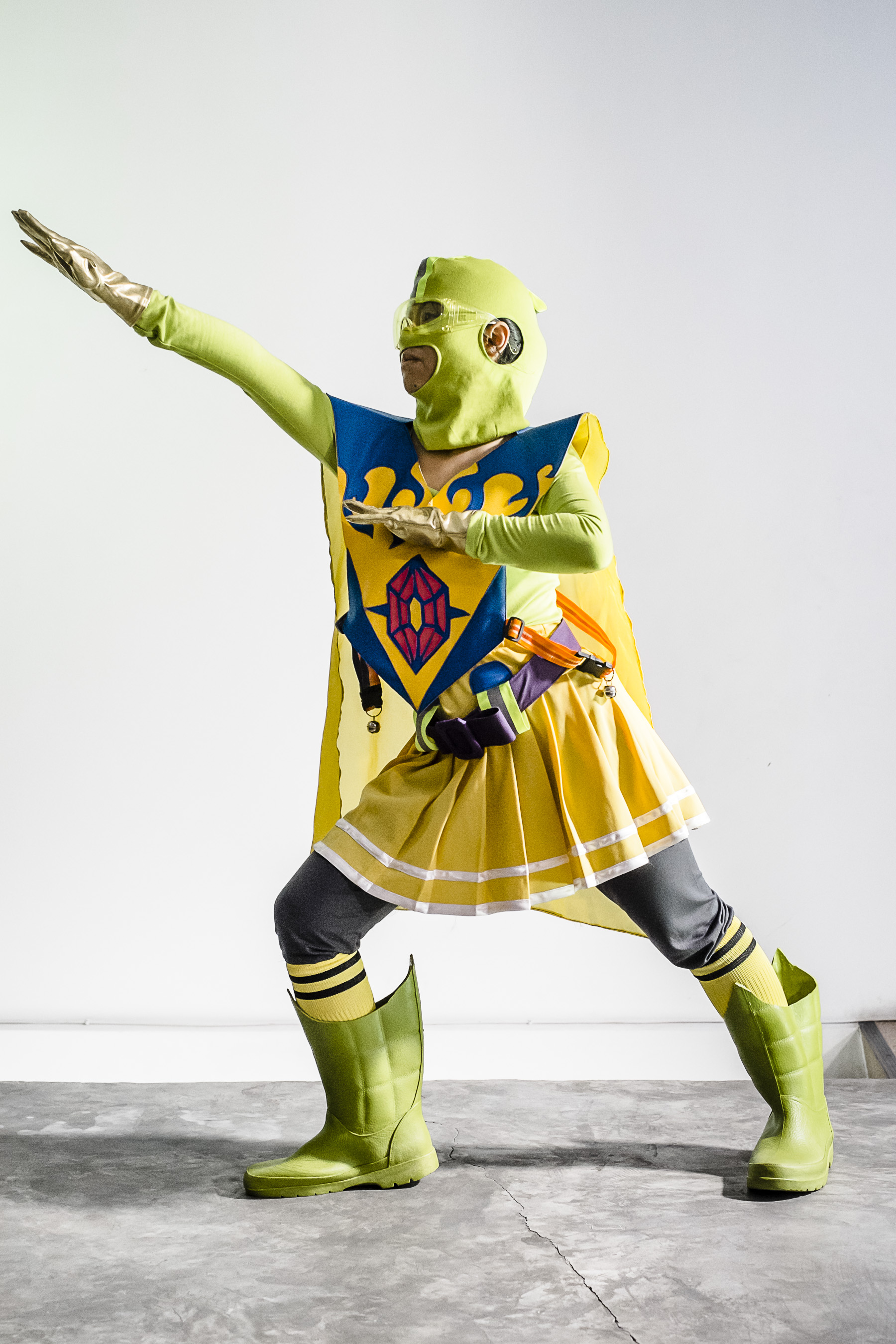 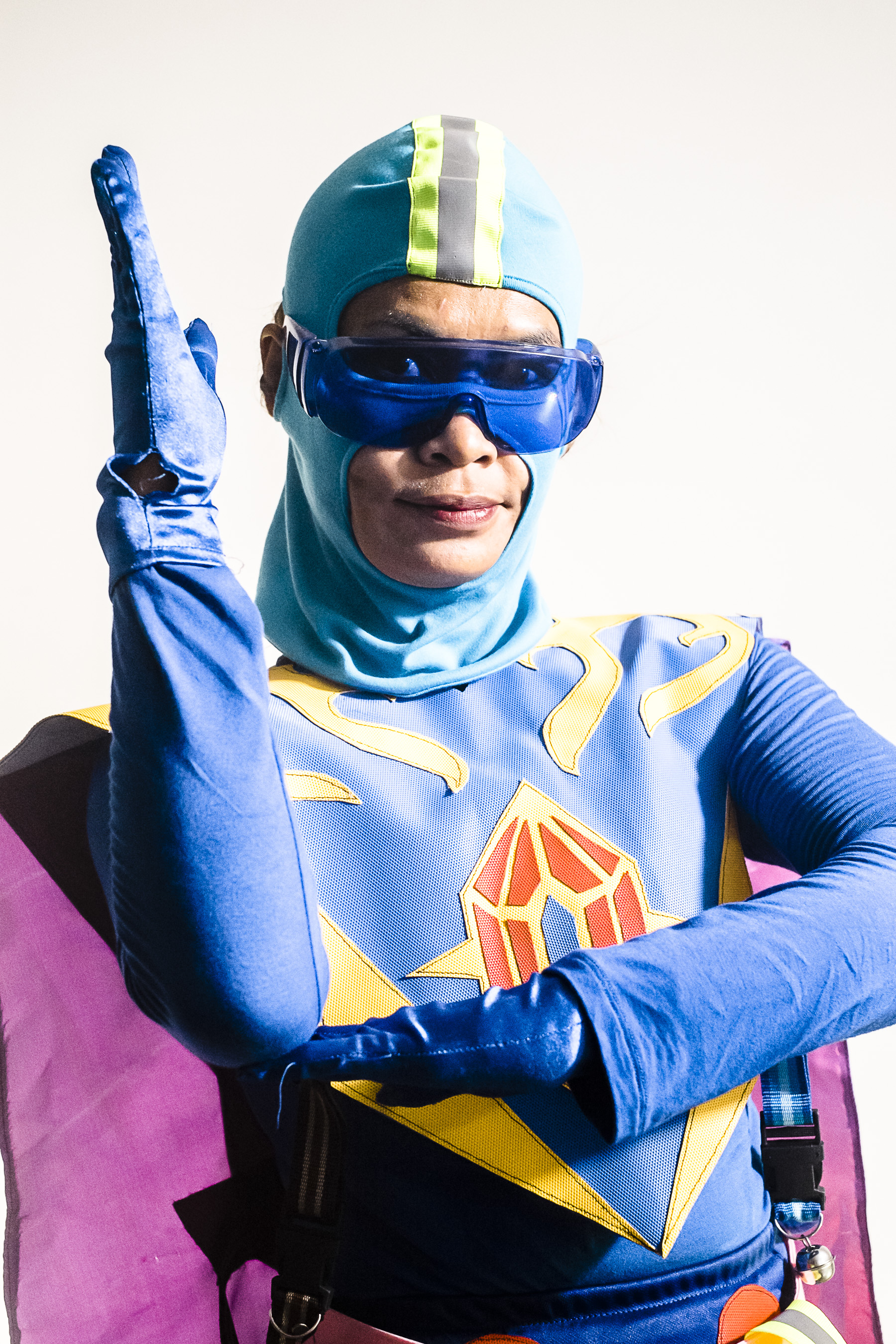 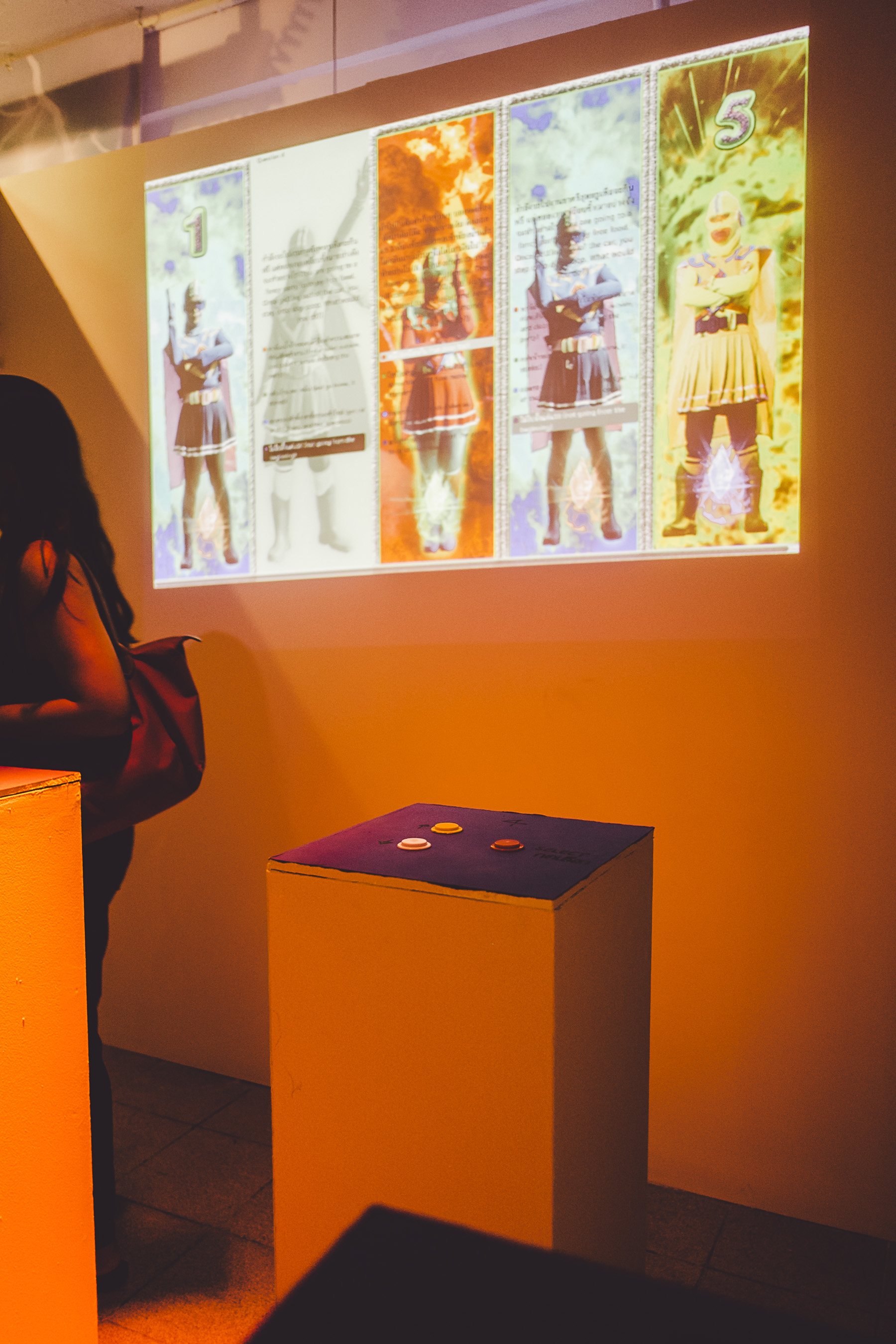 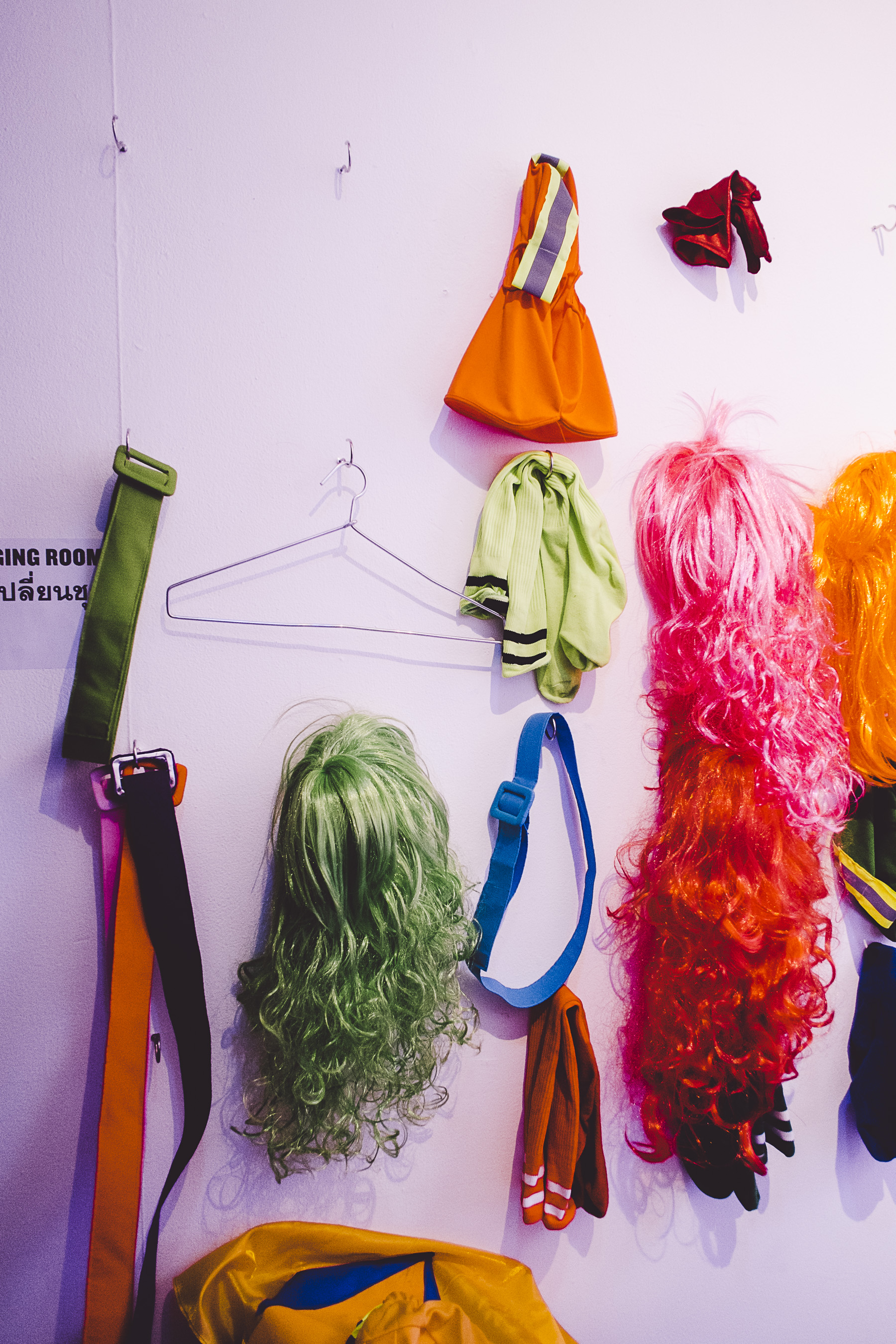 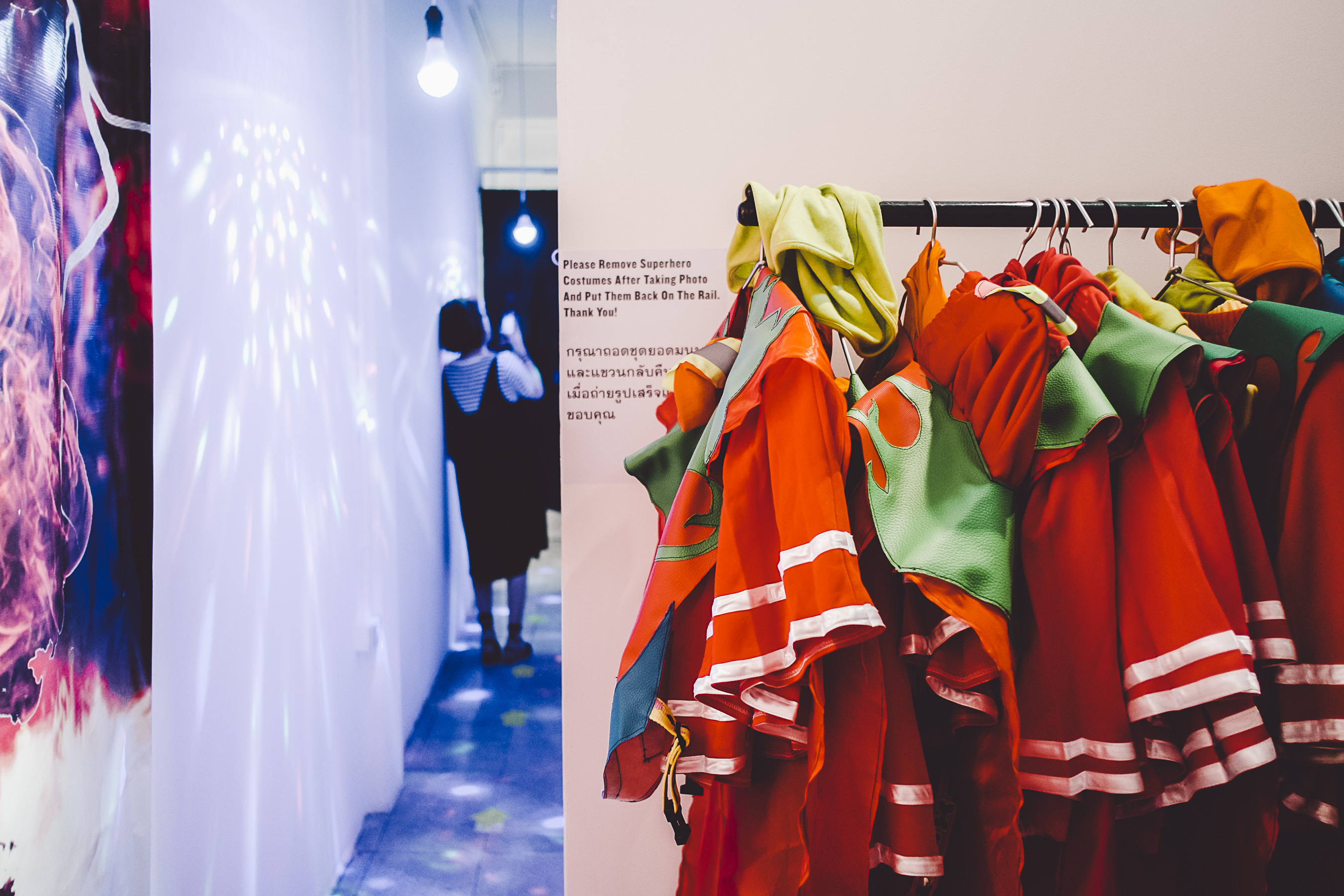 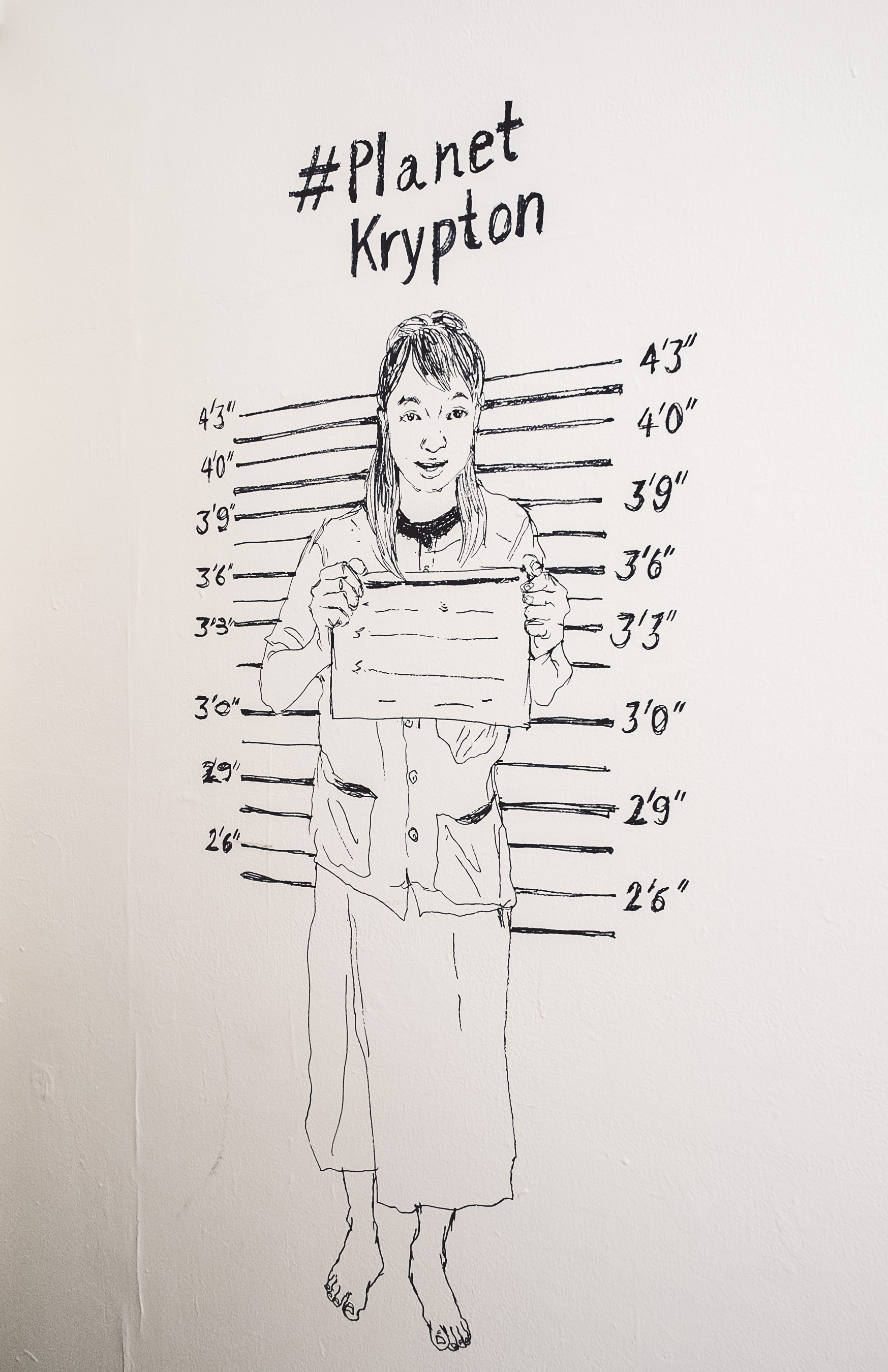 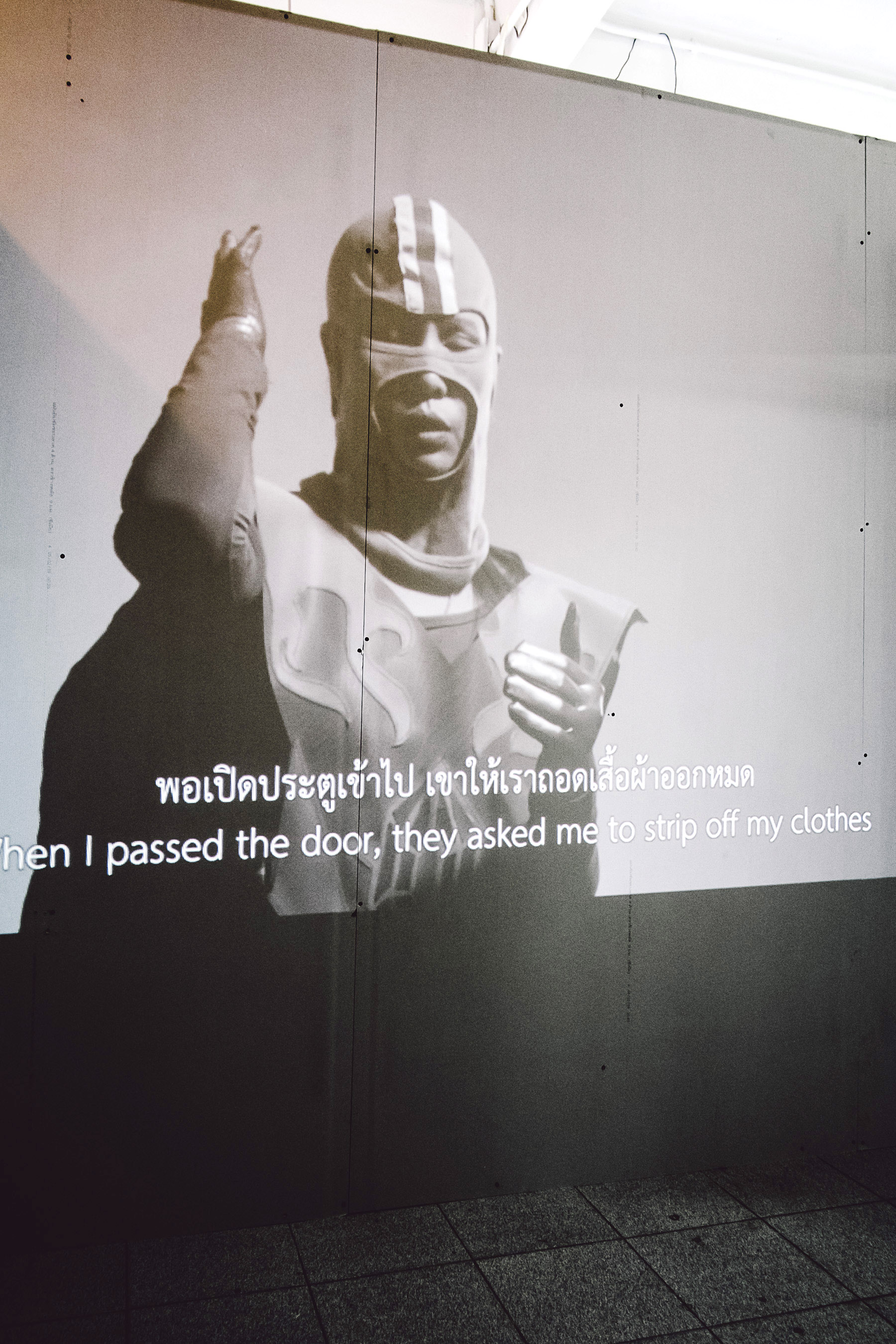 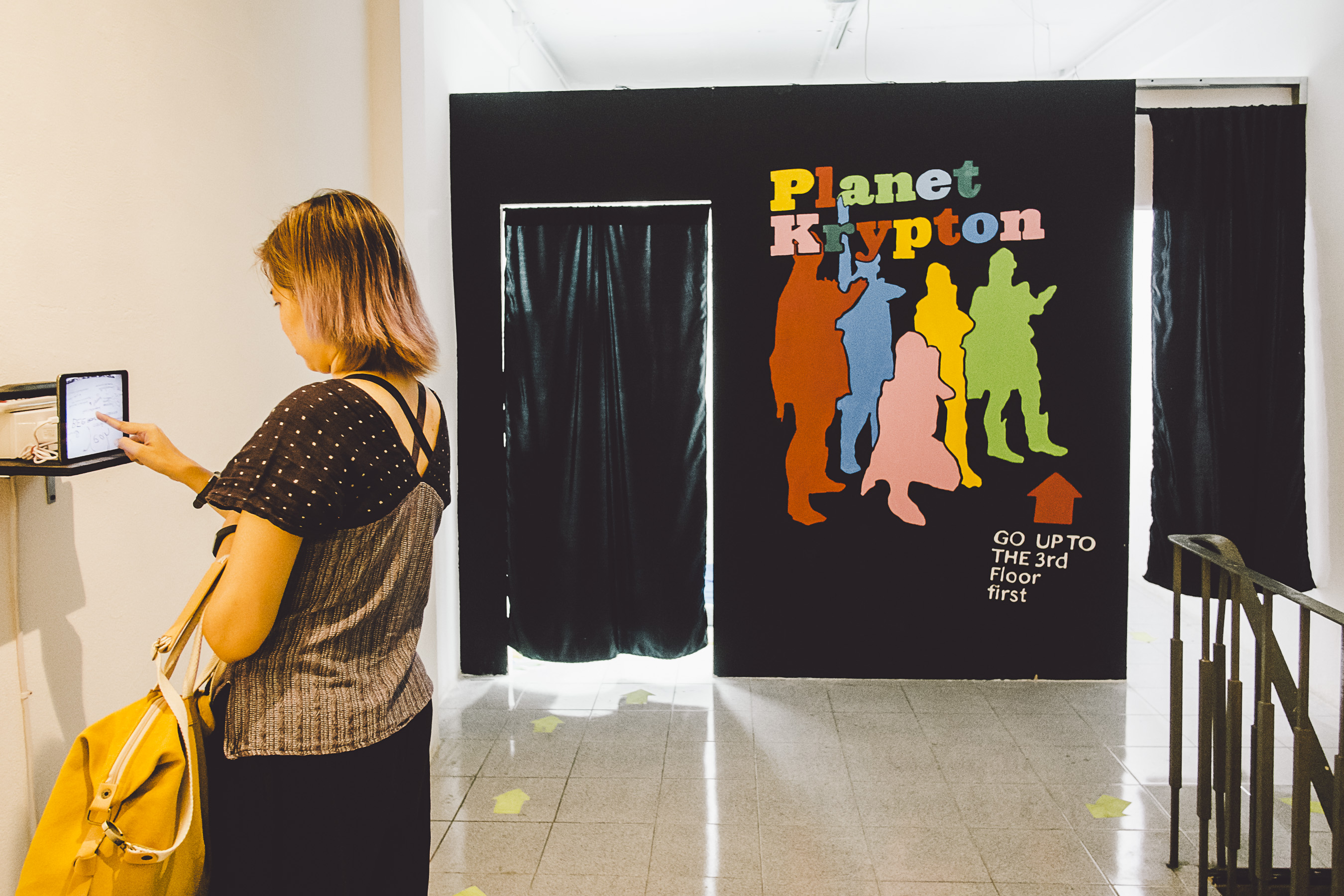 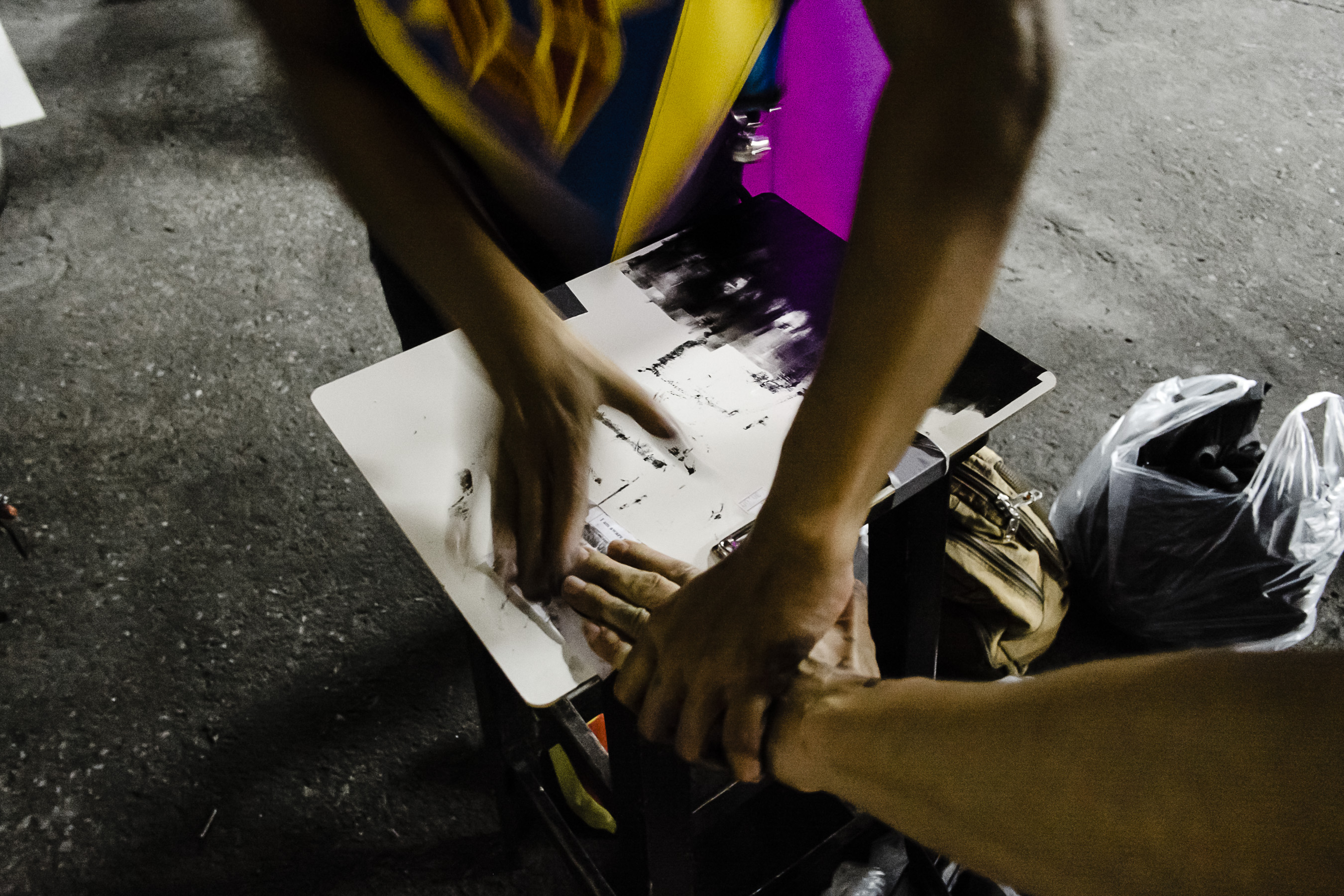 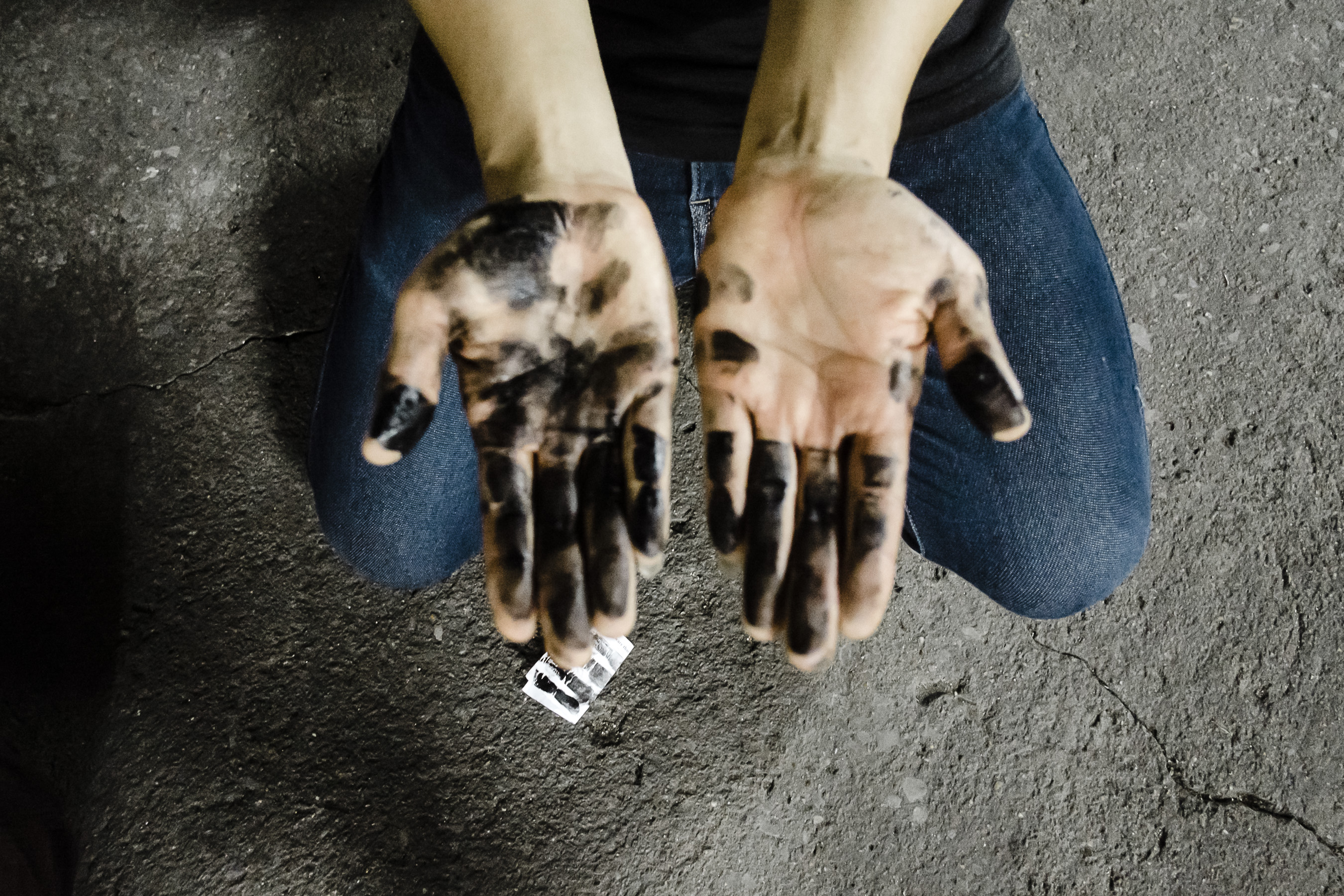 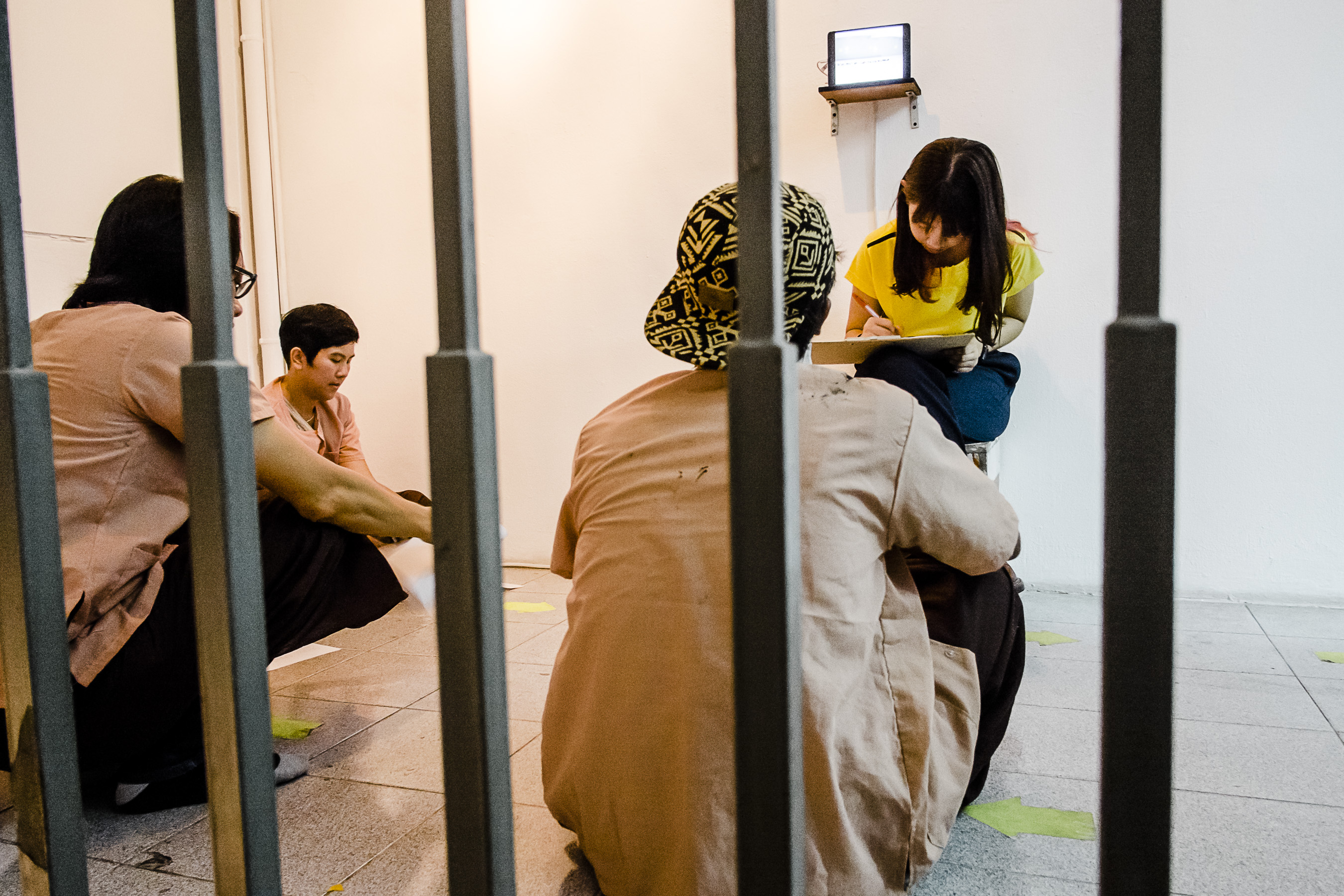 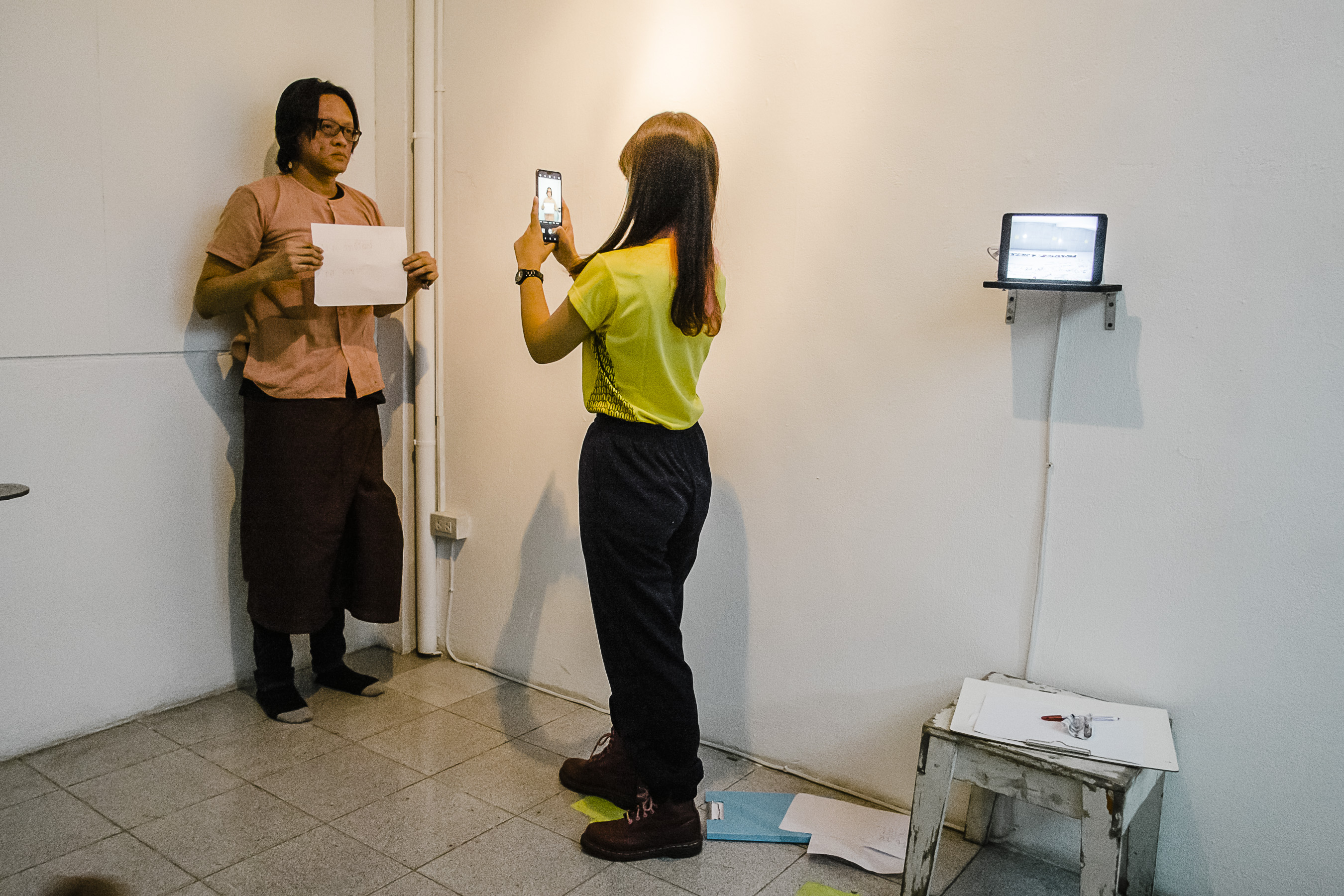 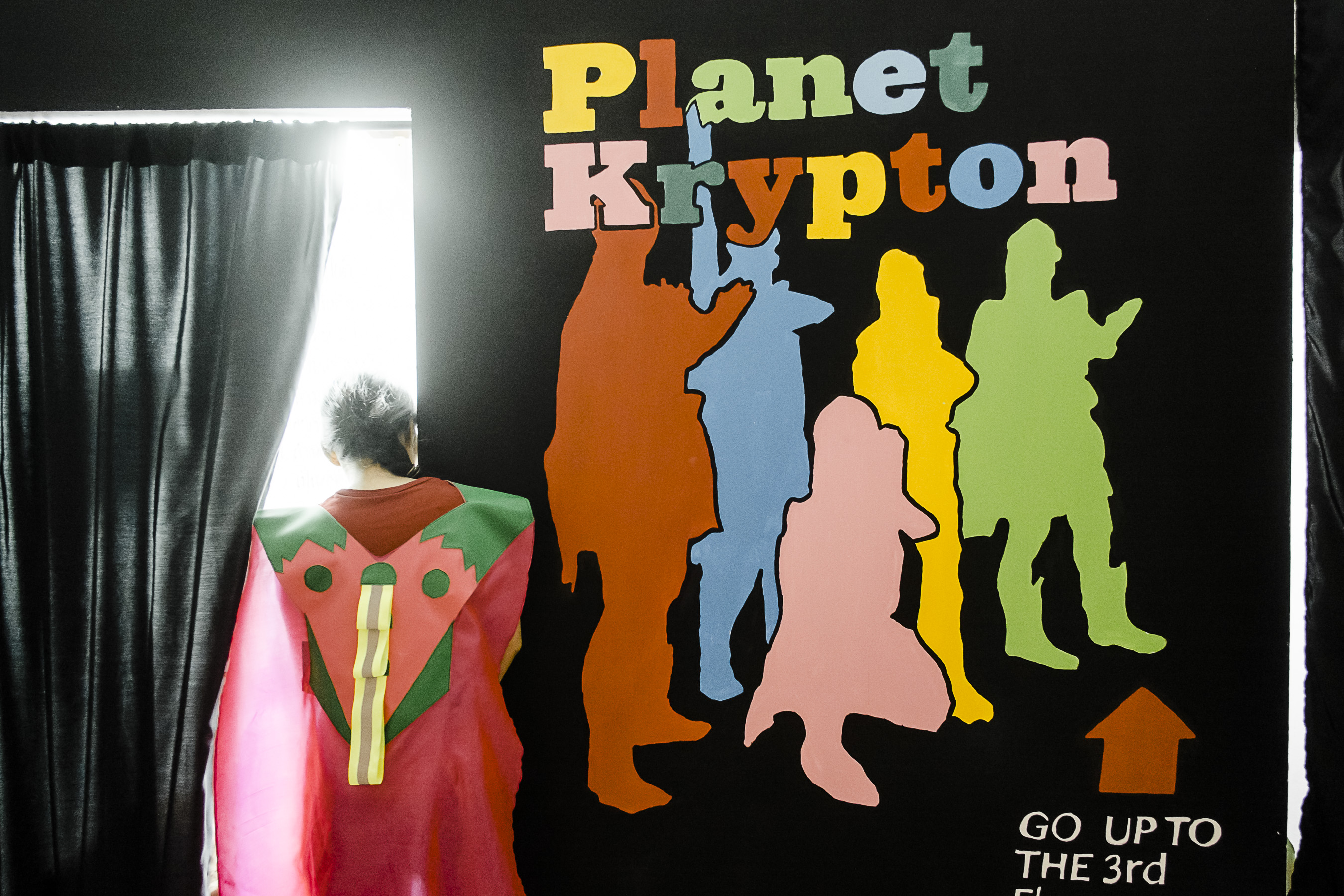 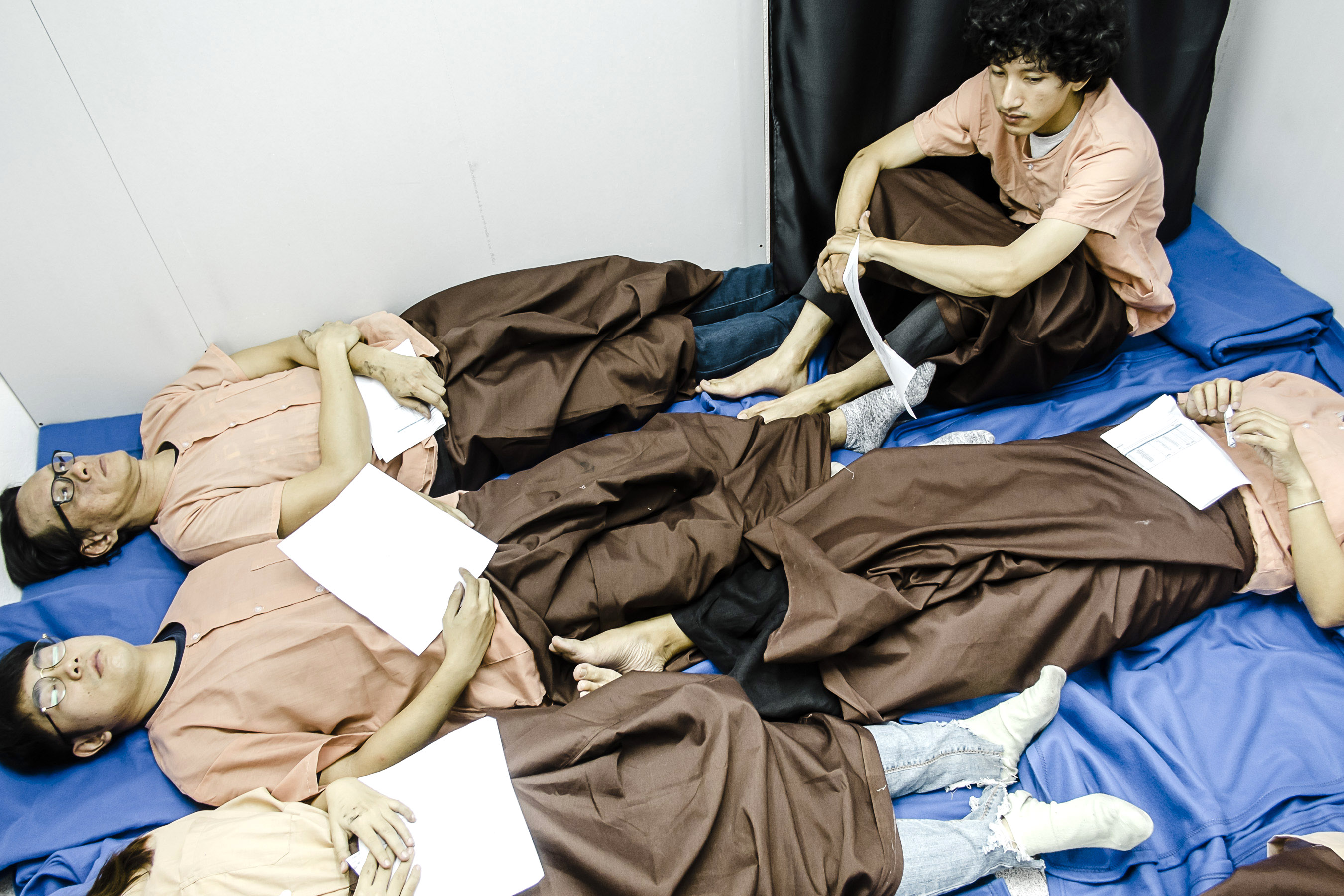 ‘Planet Krypton’ is an exhibition about the power how a powerfully disruptive experience can transform, rather than break, some people. It’s a story of how, for broken but open people, the toughest time of their life can remake them, and awaken them to a sense of empathy with the suffering of others. It’s about how the denial of freedom is an attack on people’s very souls, and how in some exceptional cases they can rise from it as more complete human beings with a deeper connection to others. It’s an exhibition about heroes.

Prontip’s story of being incarcerated for violating the lese majeste law might be seen as just another casualty of Thailand’s political wars. But if we look deeper, it is symbolic of the changes in our society. The country is rapidly falling into a deep social trough, where each person only fights for themselves, where connections between people are weakened by the blinkers that a repressive government puts on them. The result is a kind of tunnel vision. Hence the extreme divisions and tribal and political turf wars that are tearing the country apart.

But instead of allowing herself to be broken and lashing out with anger and resentment towards the world, Prontip chose to let change happen, and to become part of a community. She asked herself what her responsibility in the prison was, and by focusing on her new mission — to encourage the women to help each other survive this darkest time — she earned their trust and won the freedom to make a lasting difference. It’s the path she chooses that sets her free.

In collaboration with the conceptual artist Pisitakun Kuntalang, Planet Krypton offers an immersive experience to the audience and asks them how they would deal with radical disruption in their lives. It is part of an ongoing discussion about the potential of creativity to transform a harsh reality, as well as about the ways art activates the past in the present.

Sometimes we know that deep down in all of us, we are not normal.  We all have hidden sin in our heart. Even though we ourselves do not feel our secret is wrong, we know that those around us would view it as so. We secret that abnormality in the darkest place possible and do not let others know, see, hear or touch it. Because it a sin, a pain, something lacking in the virtues that others worship.

If a god were to gain human-like equalities, perhaps he would become more virtuous—or, on the other hand, perhaps he would become more evil. Becoming human-like is no more difficult whether you are a god or a monster, because being human depends more on power and ability. Virtue and sin depends on who gets to be human.
But for this small and extremely ordinary person … concealing her abnormalities became the best option, even if doing so meant she could not know herself well and believe in her own power.

If transported to a distant universe, you would have no way to knowing how many stars there determine goodness and evil, in constellations different to those of the superhero worlds you have seen on movie screens (which themselves are based on the worlds of humans). In a universe lightyears away, humans do not determine anything. There, nobody knows what it is to reach the peak of being human. Nobody can explain it clearly. Hey! Can you stop thinking about that boy who was bitten by a spider? This isn’t going to be that easy.

Perhaps the first thing that you will have to understand, no, feel is pain. That is the first step in becoming a human. Yes, every molecule of your body will be torn apart and remade into something of value, which will be so painful your heart will almost break. But if you survive, you will have developed from something weak into a human. And as you grow, you will be pained again and again, alerting you to your fragile inner state that is the source of both your internal and external growth.

Many different things can pain a person. If the cause is legitimate and appropriate, our pain receives empathy and we do not hesitate to tell others about it. But if the pain we face is a pain that is borne from our own evilness, who can we tell?  Who can we tell if all the tribulations we face grow from our own sins, as defined on the star on which we live?
It may be that we are just peculiarities on your star, and your star is the training ground where we will grow our potential. Your damn prison has been built to detain us with the hope that we will be what you want once we exit—that’s how humans think, after all. Don’t you know that the prison you have built is becoming a tunnel of the dimension and time which will bring us over to the power source in our home planet.

When the pain fades away, we will know that we have broken free of that former humane and evolved into our full potential. The question is: will we be even more peculiar once we return to the star-world?

It's not easy that the people in this world would sit and listen to any kind of the stories of any strangers like us. Even though we had felt that we are super heroes but we didn't come from movie screen because, in fact, we walk around you, the human that never look at us as a hero but as just a sinner with no moral.

We are afraid of telling our stories to anyone, because we don't understand any shitty value and system created by the so called human. We are afraid, we are sick of the judgement and detests the way human look at us. It hurts so much to the point that we can't feel anything anymore. We finally realise that we're maturing and reaching to our full potential. We are not afraid to talk about the story of that dark planet anymore. Because one day, it could be you who have to go to this place and experience it like we do. When your time comes, we could only hope that you would believe in your potential as much as you can.