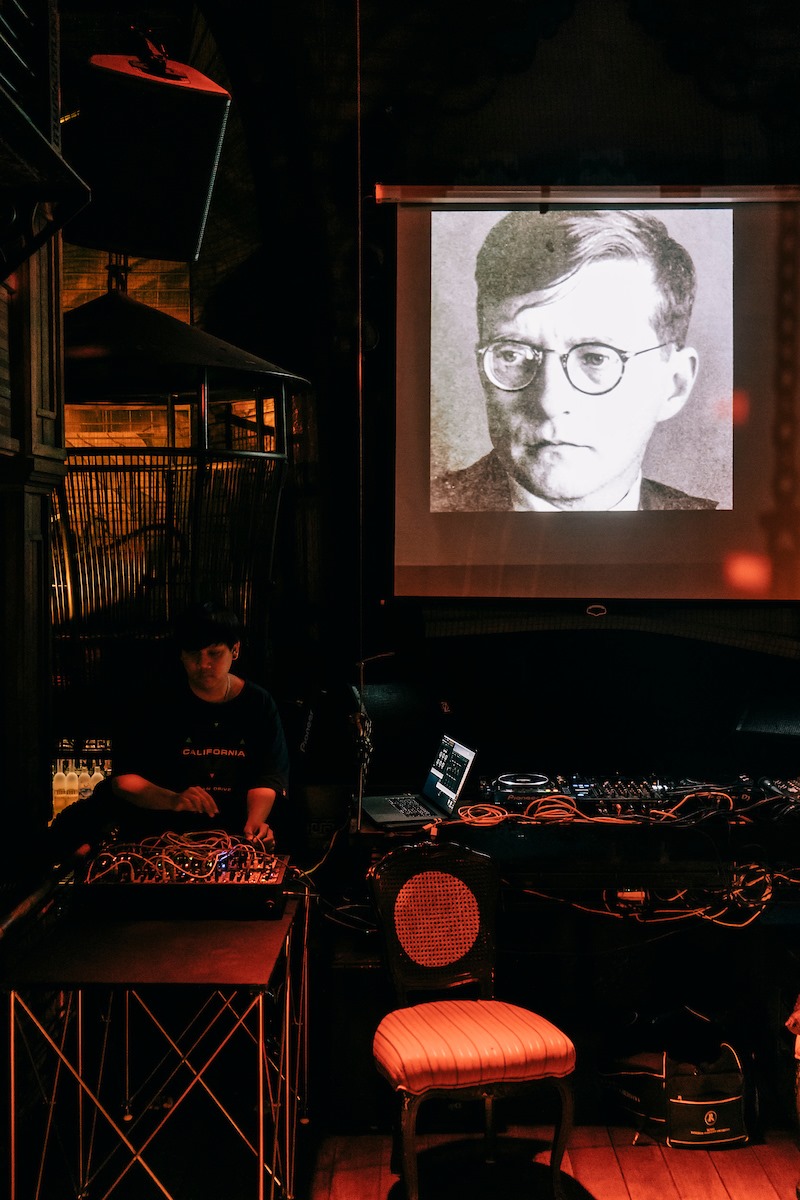 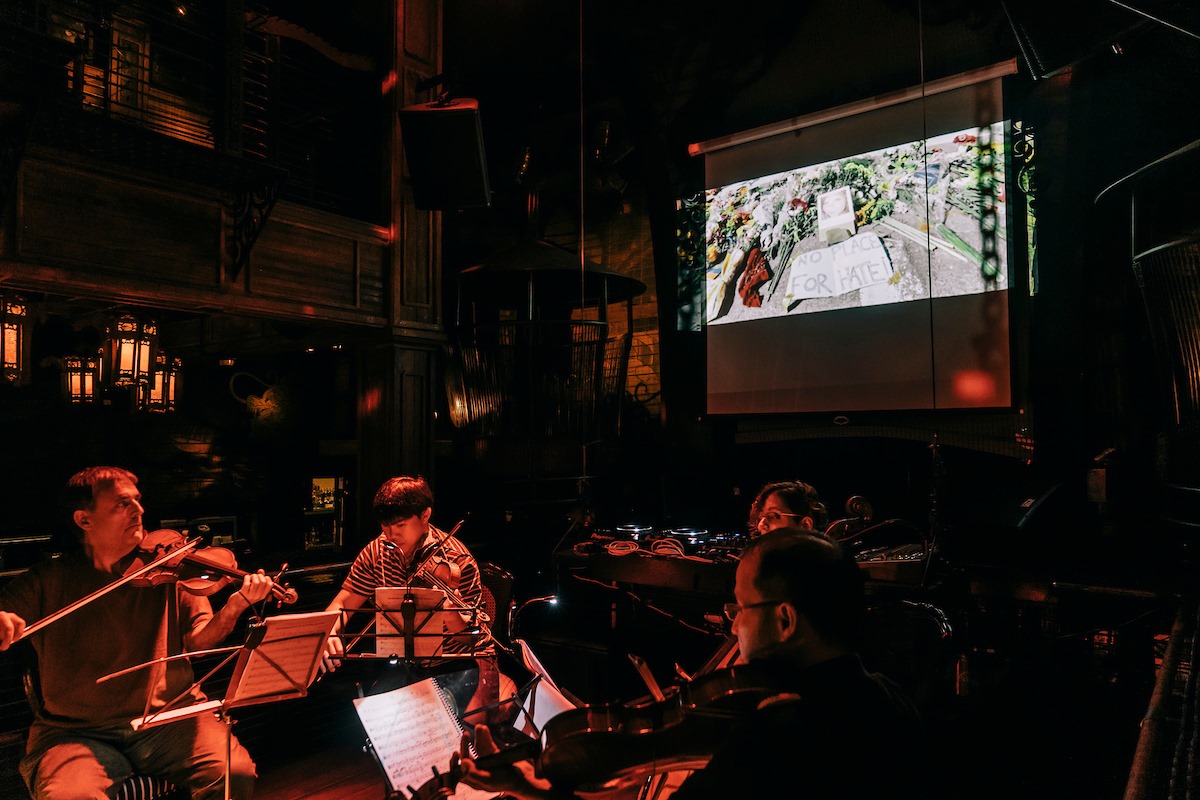 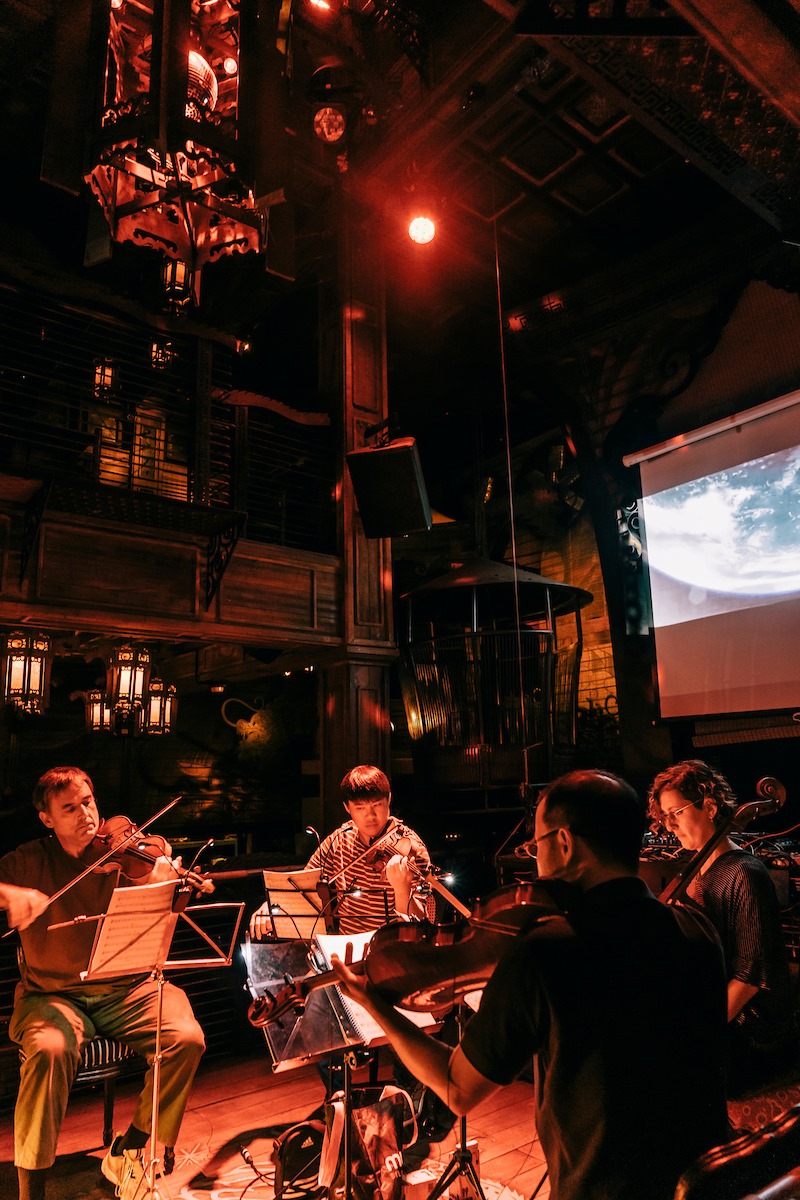 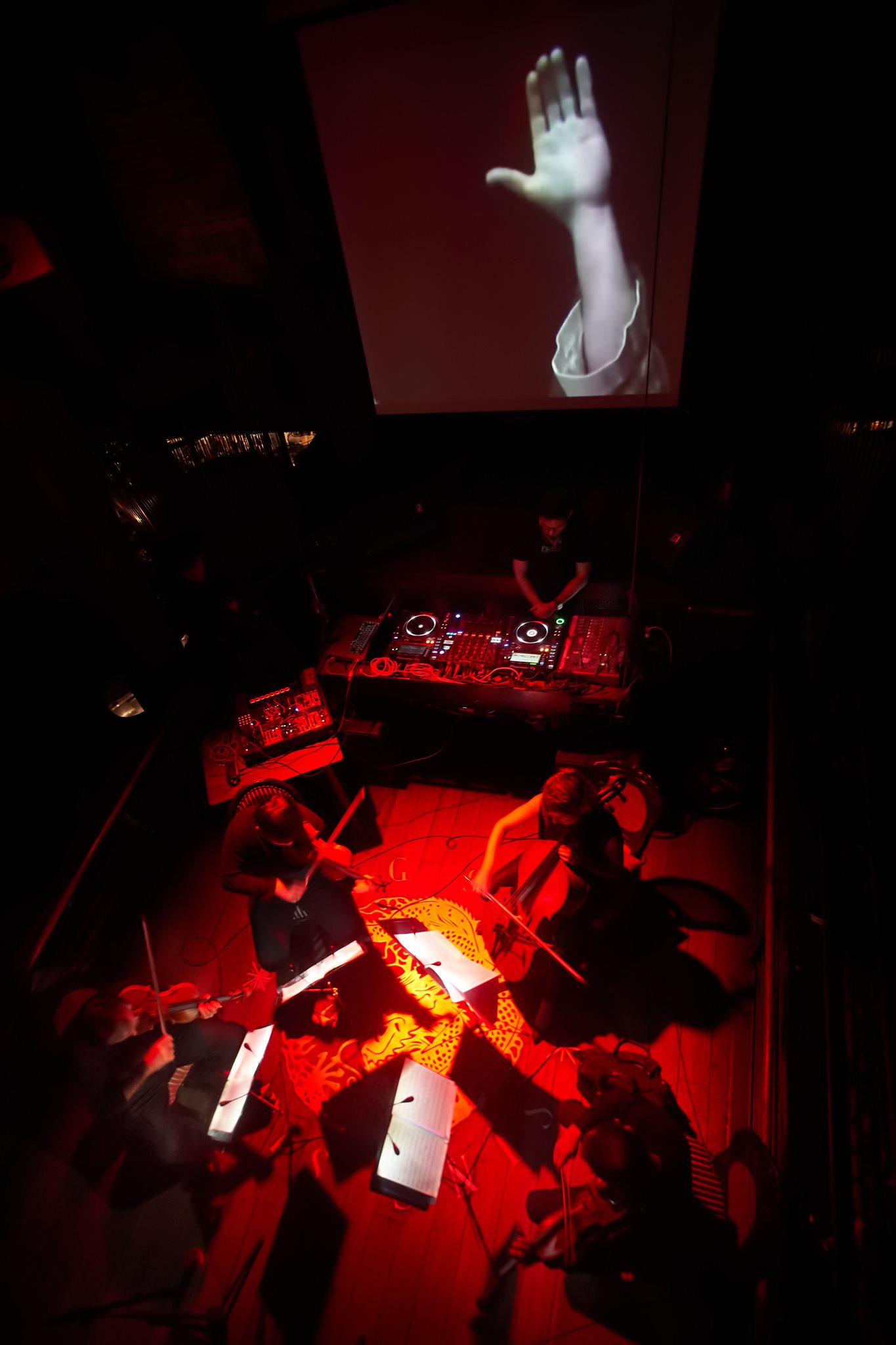 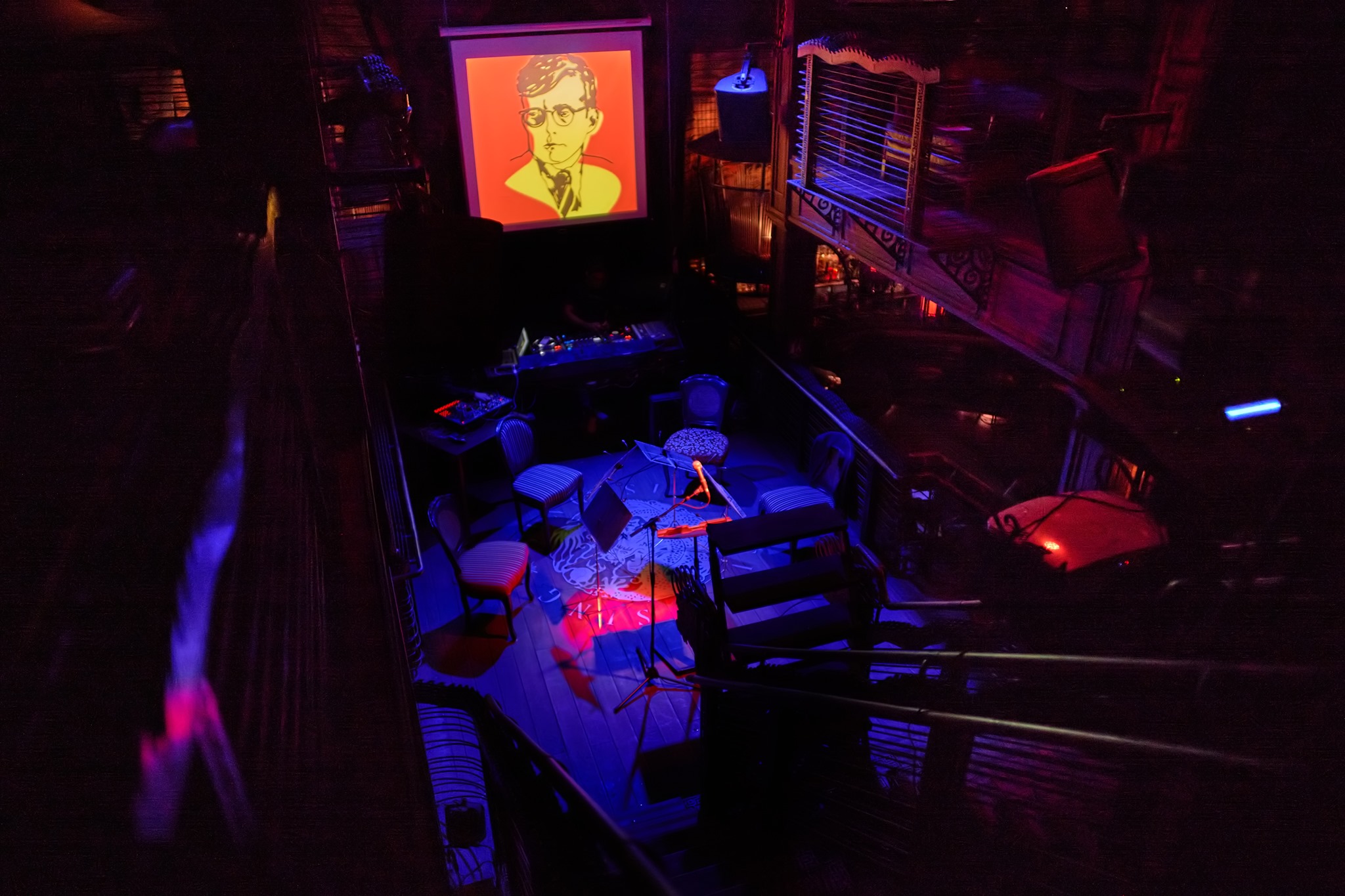 Pro Musica & WTF gallery in partnership with Sing Sing Theatre present COUNTERPOINT. For the first time ever in Bangkok, the audience will experience “avant-garde" classical music performance in one of the most stunning and well-known clubs in Bangkok, in the least traditional way. There will be no seating, no strict rules for the audience to applaud and not applaud. Everyone is free to roam around the club, buy drinks and find their own corners to enjoy the performance.

The event kicks off with four poetry readings accompanied by live electronic music. The performances by both poetry readers and electronic musicians are the artists’ personal responses, composed and recited specifically to the classical work that is to follow, shostakovich's Quartet's No.8.

In the second part, Pro Musica Quartet will perform Shostakovich’s String Shostakovich’s Quartet No. 8 -- five dramatic movements without pause that will be combined with contemporary animated visuals created by a new-media artist and a journalist.

In the summer of 1960 Shostakovich's work on the score of a Soviet-East German film took him to Dresden, the German city that had been destroyed in 1945 by an Allied firebombing which killed more people than the atomic bombing of Hiroshima. There, in a span of only three days, Shostakovich composed string Quartet No. 8 inscribed “In memory of victims of authoritarian and war” which became his best known work for its intensity, immediacy, pain, shock and stunning silences. Although Shostakovich maintained that he could never hear Quartet No. 8 without breaking into tears, the work is not self-pitying. Rather its genius is that it transcends individual pain to address all human despair. It is this which explains its profundity. The torment that it voices is the tragic, human agony of all those who have experienced grievous loss whether it be due to authoritarian, war, or personal bereavement. Shostakovich's Quartet No.8 String Quartet resonates with this bitter universal experience; it is truly 'music written with the heart's blood'; that is why it is a masterpiece of the twentieth century.

How to yoo pen

At the countless contradictions

Make sure you and yours go further

Don’t think too much about rights

Or concern yourself with liberties

If you speak sparingly

Save your energy for your own problems

Side-step the beggar on the street

When you see rotting slums next to shimmering towers,

Focus on the new and good, soon all will gentrify

Then your condo price will go up,

And you can leverage it for another one

Don’t think “Only for some”

Pretend that you don’t see

Why the man with a criminal record

Is now running a ministry

Or that the law is up to interpretation

Or why some people disappear

As long as you’re a good person

There is no need to fear

And you’ll sleep without worry

After all, if the leaders say so

You live in the most exceptional country

Where foreigners flock to visit

Wishing that they could stay

So be proud and grateful

No one around you is complaining

They all go to work and mind their own business

They don’t speak ill of their father or their homeland

They stand up when required, kneel on command,

Revere the ancestors, who’ve bestowed upon us

Acquiesce yourself to amnesia and tow the official line

What lynchings? What student massacres?

They were armed communists and deserved to die

Sometimes force is necessary for the country to survive

What about those unwashed troublemakers?

They looted and burned our city

Into the drains of history

The coups? They brought peace and security

Curb your instinct to connect the dots

Abandon the dangerous pursuit of knowledge

Quiet down your liberal graduate’s thoughts

Of teaching your child to be fair

While ensuring her place in a rigged game

That you’ve learned well how to play

So she can win society’s favors,

And she’ll need not care

About the social contract

Teach her to think critically

But silence her inconvenient questions

Send her abroad for new ideas,

But tell her: “Never forget

Since when she returns

She needs to yoo pen

To delicately dance around the truth

And pivot between fact and fiction

But yoo pen we have to be,

What’s the point of fighting?

So let’s use our advantages

Make sure we and ours go further

Because when we yoo pen

We will yoo sabai

We’ll glide atop history without burden

And wear our glorious past with pride

We’ll gaily dress our hearts in the tricolor

And declare our allegiance in style,

With a bloodred coat of lipstick shining

There. Over there, swept to the corner of the stone floor and stone stair

An orphaned lock of a schoolgirl’s hair

Recently convicted of defiant existence, its forbidden excess inch of aligned resistance Executed beneath the flag of nation order and religion

Lying in the rainy gutter, dreaming of its lost child-mother

In whose face it would hang like a veil, swept by her fingers, catching breeze like a sail Summer bleached by the sun or frosted pink at the tips, to match lipstick lips

On a future first date or bucket list vacation

In the dissolving monsoon of a karma culture nation

That commands it to die and await reincarnation -- liberty’s only an attainable station In the next life, the next life

All falling hair dreams of the next life

All the hanging things dream of the next life

What else could I have been, thinks yesterday’s front page

I could have been the people’s Book of Revelations

Their war crime ledger, the spark for reparations

The razor truth of a free press rage, a weapon of information

Not this censored puff piece of power propagation

Ads for skin creams and status quo, carcinogened with aspiration

And to think that I was meant to be, the repurposed life of a murdered tree

So having failed already once at reincarnation, I have only regret and a desire to see The next life, the next life

All the newspapers dream of the next life

Chasing paper tigers in the next life

Your burning city holds its breath until it can respire

When umbrellas strain under monsoon rain

And not the blue liquid waste of cops saving face

When our wet black shirts are just statements of style

You left us nothing but the next life

And we’re no longer waiting for the next life

Truly, I live in dark times!

An artless word is foolish. A smooth forehead

Points to insensitivity. He who laughs

Has not yet received

What times are these, in which

A conversation about trees is almost a crime

For in doing so we maintain our silence about so much wrongdoing!

And he who walks quietly across the street,

Passes out of the reach of his friends

Who are in danger?

It is true: I work for a living

But, believe me, that is a coincidence. Nothing

That I do gives me the right to eat my fill.

By chance I have been spared. (If my luck does not hold,

They tell me: eat and drink. Be glad to be among the haves!

But how can I eat and drink

When I take what I eat from the starving

And those who thirst do not have my glass of water?

And yet I eat and drink.

I would happily be wise.

The old books teach us what wisdom is:

To retreat from the strife of the world

To live out the brief time that is your lot

To make your way without violence

To repay evil with good —

The wise do not seek to satisfy their desires,

But to forget them.

But I cannot heed this:

Truly I live in dark times!

I came into the cities in a time of disorder

I came among men in a time of turmoil

And I rose up with them.

I ate my food between slaughters.

I laid down to sleep among murderers.

I tended to love with abandon.

I looked upon nature with impatience.

In my time streets led into a swamp.

My language betrayed me to the slaughterer.

There was little I could do. But without me

The rulers sat more securely, or so I hoped.

The powers were so limited. The goal

Lay far in the distance

It could clearly be seen although even I

Could hardly hope to reach it.

You, who shall resurface following the flood

In which we have perished,

When you speak of our weaknesses,

That you have escaped.

For we went forth, changing our country more frequently than our shoes

Through the class warfare, despairing

That there was only injustice and no outrage.

And yet we knew:

Even the hatred of squalor

Even anger against injustice

Makes the voice grow hoarse. We

Who wished to lay the foundation for gentleness

Could not ourselves be gentle.

But you, when at last the time comes

That man can aid his fellow man,

Should think upon us